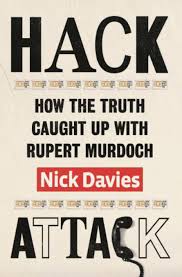 “This is the strangest story I have ever written.”

This is also a brilliant piece of aggressive, personalised investigative, well written journalism, an expose of British high (and not so high or grand) grandees at work. There is an extra sense of electricity in that the saga is still ongoing. We have entered a sporting contest at half time. The establishment has had its say.  Davies has a rather different version. And he is no lone wolf here but an experienced practitioner not in the “dark arts of journalism” that he wishes to expose but in the intricate geography of the English legal system. He is of a school of journalism that checks its facts.

The protagonists are the highest and mightiest – divided factions of press barons, police, politicians and a vociferous candy of aggrieved celebrities who have had their private lives meddled with. As Davies points out those last might not be so interesting except that one of the victims of phone hacking for example happened to be Her Majesty’s Home Secretary who is, one supposes, notionally in charge of national security. And another was the deputy prime minister.

At the other end of the scale, the actor Hugh Grant was playing cricket and the license plates of all the watching cars were run through the national database to secure the names and addresses of their owners in case a picture opportunity might present itself or something even more salacious.

Davies paints pictures of the News of the World newsroom at the height of its excesses as a mix of paranoiac bullying, a testosterone terror, a Stasi of the modern era able to snoop on calls, texts, emails, databases…no detail too trivial that might not be spun against a victim at some time. Or in the jargon, someone would be monstered.

There is a further frisson in that Davies is not quite as impartial a reporter as he might have been. He has not jetted in from Mars. He is the hack on the attack. These are people he grew up with as colleagues or fellow journalists, a hack himself. There is a quote on the back cover from Sir Harold Evans about a “rottenness at the heart of British life” but Evans also has a bit of an agenda as far as Rupert Murdoch is concerned. And Davies does not pull any punches when it comes to describing his adversaries: “Inside the walls of Murdoch’s castle, there was something like a mass grave full of several decades of buried secrets, so big and stinking…”

This is a particularly English civil war – each wound, each action chronicled in slow motion – Murdoch’s Cavaliers swashbuckling, free wheeling and free marketing on one side, the Guardian’s plebeian legal Roundheads gathering evidence through the corpses on the other. Young James Murdoch, the pretender to his daddy’s throne is cast as The Hammer ie he sees everything as a nail. Everyone here is armoured in lawyers.

As with Watergate and other scandals, it is the cover-up that leaves the lasting stain.

Words, words, words...
View all posts by drewsmith28 →
This entry was posted in 101greatreads, Non fiction and tagged hack attack, how the truth caught up with rupert murdoch, nick davies, phone scandal. Bookmark the permalink.