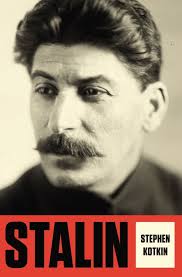 “Russia’s double headed eagle nested across a greater expanse than that of any other state, before or since.”

Stephen Kotkin opens with this grandiose statement and proceeds to tell us this is not just a book about Stalin at all but all of modern history. He comes to history with his own ego.

But I like big dick history professors coming out of their library caves throwing tomes of ancientana at us. Usually professors are articulate. The question, from a strictly literary point of view, is how they handle the context and narrative. Some are hostage to their research, others stride on regardless. I came to this one off the back of the erudite, elegant and skilful Lenin by Robert Service (who has also penned a Stalin bio).

Kotkin, is a professor at Princetown. And this is not just one book but the first of a planned trilogy. This one is 949 pages of which 210 are notes and index. The sub deck is Paradoxes of Power 1878-1923. The paradox of course is communism or is that tsarism? Or just power?

My old history master wrote cryptic notes in the margins of our adolescent essays where we might have been saying the obvious or the crass. Ohh he might write with one ! or two !! depending how high his eyebrow might been raised. Had Kotkin been in our class his margins might have been well decorated.  Stalin has a penis, he tells us. Cor!! If the south had won the American civil war things might have been different. Really?!

Personally I wanted to read more about how exiled revolutionaries consorted with peasant girls in Siberia – apparently a regular distraction for political dissidents, Stalin fathered two children while under sentence. And rather less of the stunningly boring birth of socialism between 1900 and 1917. There comes a point where words like socialism, labour, democracy, marxism, communism etc are so overused they become meaningless. The language of 20th century politics is still narrow and limited, as if politics has not changed or evolved and are stuck between the same shafts of the same cart.  We still have a labour party, a working class etc just as they had in Russia in 1850. The only thing we don’t have is an autocractic tsar who served to demonstrate that the key problem with autocracay is that eventually nobody needs you.

The era before Stalin came to power there were no cars, no planes, no X-rays, no telephones and to boot he spent much of his formative time in exile anyway (as did Lenin) and could hardly have grasped what we now take for granted.

He, like Lenin, arrived in power of the biggest nation on the planet with hardly any experience give or take a good school report, a few bank robberies and some petty activism in his home town Georgia which was a little more akin to fascism or nationalism than communism. He faced the same the huge problem that is Russia just as the Tsars had. They lasted 300 years. His influence lasted the best part of a few decades. Arguably Vladimir Putin still faces the same problems.

“Politics is less science than art,” said  Otto von Bismark. “It is not a subject that can be taught.”An interesting gauge to apply to today’s bureaucratically inclined politicos of all sides. Lenin and Stalin made it up as they went along…