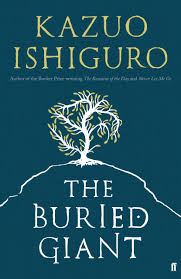 “You would have searched a long time for the sort of winding lane or tranquil meadow for which England later became celebrated.”

We are in Shrek country. Frodo-land. There are ogres, sprites, curses. It is middle England, post Arthurian, pre millennium. Ishiguro laces his tale with ‘the mist of forgetfulness’ and the modern themes of Alzheimer’s, collective amnesias post despotic regimes, racism and even ageism. We know from his other writing, that he is playing with us…

His elderly couple set off on a journey to find their son not being completely sure they will even recognise him. But they have a quest in this strange unconstructed world of burrowed tunnels, of a handsome boatman, of mad, old and sometimes wise women…There is talk of dragons. And of love. Axl invariably talks to his wife as “princess”. Their dialogue is formally polite, from a time when talking or even just verbalising was more important. Ishiguro is Japanese (although he came to the UK when he was five but did not get a passport until he nearly 30) and this old England smells a bit oriental too. A bit Basho.

Their discourses fill in the pieces around a puzzle but soon other characters find their own voices too. These varying elements are  colourful jousting lances rammed through a plot of…well a dark ages road trip, not without a bit of Indiana Jones adventure somewhat heightened by the strange cast whose actions are hard to predict even for themselves which helps draw us deeper into their world.

There is a certain relaxation in wallowing around in all this warm bath of olde worlde fantasy. We are looking safely down the binoculars of our narrator’s history. I keep being reminded, quite randomly, that this was a time when England was as much a murderous mess as the Middle East or Africa seems now. Is that the point? An allegory…I won’t spoil it for you.