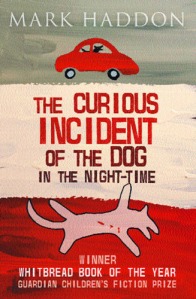 “It was 7 minutes after midnight. The dog was lying on the grass in the middle of the lawn in front of Mrs Shear’s house.”

On first reading of Mark Haddon’s Curious Incident of the Dog in the Night-Time you might not expect this teenage monologue to transfer to stage or even screen. But the National Theatre’s clever production has been playing to packed houses. The trick is that the stage becomes the Condition, the box that contains. Haddon has disowned the notion that Curious is specifically about asperger’s (itself now also downgraded to part of the wider autism family) even though the original jacket copy said as much. He  says it is about being an outsider, or in the theatre version an insider.

Equally I am not convinced about its classification as either children’s literature or even young adult. The angst is outside and grown-up. The style is false naive, a bit tamagochi even, but the issues are not the stuff of children’s literature anymore than if Snow White had been schizophrenic.

In the book the adults are shadows, but on stage the actors change the dynamic so the drama and tragedy is as much about them, implications become reality. Christopher, as he says, does not really care about other people anyway, his predicament is a separate dimension, as is his redeeming enthusiasm for mathematics.

It is a tribute to the original that the script so closely follows the narration. A person telling their own story on the page is allowed a certain narcissistic subjectivity. It is Christopher’s story. He has no problems apart from adults and people. All things are permissible. On stage subjectivity becomes objectified. He becomes the problem. The audience engages with everyone else’s issues. The stage teases out adult sensibilities, the dilemmas of the parents and teachers. Christopher’s modern odyssey from Swindon to London and back again ceases to be his exciting adventure and becomes everyone else’s nightmare, a child is lost, an image sweetly reflected when his pet rat makes a run for it in the tube, a good joke in the book but a bit over-excised on stage.

The plot reads like a children’s story. Troubled teenager discovers neighbour’s toy poodle killed by garden fork on the lawn. Whodunnit? “This is a murder mystery novel,” Christopher tells us, with some determination and relish.

The sharp writing, the intelligence, the unsentimental commentary, the vision set it apart where other imitators in the genre have been more blurred. The dialogue between author and reader is a clean shared crystal. Precise, curt, sharp not dissimilar to other fine first person approaches, J. D. Salinger’s Catcher in the Rye –  “all that Copperfield stuff “ –  or Kurt Vonnegut’s Slaughter House 5 – “All this happened, more or less”.

Christopher in the book has his chance to share his enthusiasm for maths including his little gimmick of not numbering the chapters sequentially but as prime numbers. There is a good maths joke on stage too. But it is not quite as intimate. The book befriends you, in a way the stage cannot.

Words, words, words...
View all posts by drewsmith28 →
This entry was posted in 101greatreads, Biography, fiction and tagged Curious Incident of the Dog in the Night-Time, Difference between stage and novel, mark haddon, Monologues, Salinger, Vonnegut. Bookmark the permalink.