The Museum of Extraordinary Things by Alice Hoffman (Simon & Schuster) 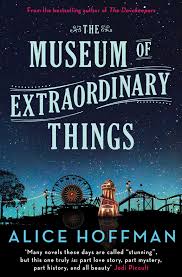 “You would think it would be impossible to find anything new in the world, creatures no man has seen before, one-of-a-kind oddities in which nature has taken a backseat to the coursing pulse of the fantastical and the marvelous.”

STORY tellers, obviously enough, get better with each new work as they evolve their skills, but publishing being publishing there always seems a bias towards the new. I picked this up thinking Alice Hoffman was one such newbie but no it transpires this is her 23rd novel plus there are eight other titles for young adults and another non fiction. It shows. This is a writer at one with her craft. Notwithstanding, the very long list of thank yous at the back of the book also illustrate the kind of leverage needed these days to lift a novel up to mainstream attention.

Brooklyn or rather Coney Island is the real star here brought back to its noisiest, dirtiest, rowdiest clamour of 1911, an escape from New York to a seaside of fixers, crooks, conmen, liverymen- deliverymen, circus performers and the freak show of the title. The descriptions are thick and taut to the point that the history wraps itself like a big rug around a plot that snaps to a lion tamer’s whip. Which is it? Fact or fiction? (I had to check with Wikipedia to see if Professor Sardie was actually mentioned or no). The story moves through this grand garrulous setting like our heroine swimming through the waves of the Hudson river.

Hoffman reveals in her notes that her grandfathers both lived here at the time and she also drew on recorded texts. She weaves layers of fiction through the backdrop, of love, of desperation, of curiosity, of detective mystery, of murder, of that old waterfront gangster politic of rich and poor.

The narrative has dual first persons, one for each of her central characters as their worlds collide. She is the daughter of the mad museum collector, curator of the exotic, creator of the woman-sawn-in-half act, Mr Freak’s freaks. He is the handsome Jewish immigrant who disowns his past, his father, his honesty. The Jewishness is cleverly played out in placard imagery that duck the usual cliches or at least throw them back in unexpected relief. She seeks salvation in swimming, he in photography (although I might quibble at how many plate images a 1911 news photographer would have been able to shoot at a time, but I cripe).

It is a clockwork menagerie of the kind that Coney Island might, surely would, have had that swirls to its monstrous, incendiary conclusions. Each bit part player is drawn so precisely you can imagine seeing them painted on the side of the medicine show wagon. More than a few are novellas in their own right.

The mix is as extravagant as some of the characters which might just say that we are all sideshow freaks in our own ways.

Curiously for all the thank yous, I doubt the veracity of the original covers. My edition is the one at the top of the page which seems very much in keeping where this was the version in greater circulation… 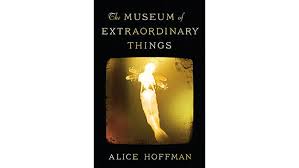 while this one appears on Hoffman’s  web site… 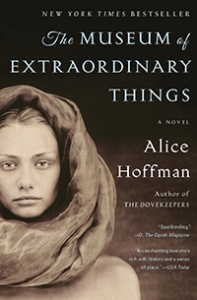 and feels remarkably similar to her well reviewed 2012 Dovekeepers 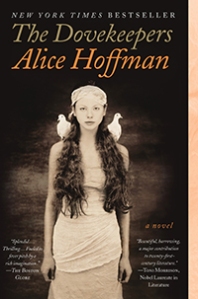 Yes, it is the story of a girl with long hair, but it is a lot more than that. At first I did not think this could be a movie, but on reflection it would make fabulous filming.