The girl who wasn’t there by Ferdinand von Schirach (Abacus) 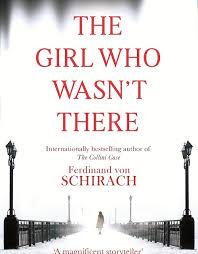 “On a fine spring day in the year 1838, a new kind of reality was created on the Boulevard de Temple in Paris”

That reality was of course photography which is part of the theme here. To those of us schooled by Morse, Lewis, the newly admirable Endeavour, Agatha, GK et al…plus having had the American experience of Chandler, Spillane, Elroy, Burke etc there is a certain benchmark for crime. This application to join is from a German lawyer Ferdinand von Schirach. There is that old joke about Europe being a happy place when the Italians run the kitchens, the Swiss the railways, the Germans make the cars and we do the TV crime.

I don’t want too often to dissect novels that are not up to scratch but in this case what is annoying is that it was on promotion prominently in Waterstones on the same week that the Booker prize long list was announced – and they were not there or only a few of them.

But what is also curious is the plaudits which are repeated twice on the openers and on the backcovers.

“Effortlessly, classy prose“, says the Observer which is an odd thing to say about a translation. I will give you an example so you judge just how classy this stuff is:

“He sat at the window and watched the passersby in the street“. Or: “She opened her mouth, but no words came out“.

The Guardian tells me the novel is “an examination of the disconnection between truth and reality“. That I suspect means it is nonsense which unfortunately is what it becomes.

The Sunday Times tells me Schirach is “celebrated“. Not in my parish and not for this.

The Times declares the story “intriguing” which as it is chopped up into two, even three batches, you would have to read the first 111 pages before you knew what to be intrigued about.

The Independent neatly calls it a “a centaur of a story” i.e. the two mismatched bits have been lashed together.

The Telegraph says Schirach is one of the most “distinctive voices in European fiction“. Presumably that means euro-trash or eurovision fiction.

Give Schirach his due – these musings are not his fault. His reputation I suspect is based on his earlier work which, crucially, was supposedly taken from his case notes so was more factional.

He starts out promisingly, I admit, in a Donna Tartt sort of way building a character and a family slowly and then wallop suddenly half way through we go off the tracks like someone has suggested to him to turn it into a crimo and make lots of money like that (dead) Swedish guy. Suddenly he wants to shoot a picture of his girlfriend surrounded by 16 or so naked men with erections. I kid you not. We also have a quite promising character who apparently does not exist anymore. This is fiction Ferd, did no one tell you? As to the court scenes, Rumpole, Rumpole, Rumpole…

Peter Preston wrote in the Guardian about restaurant critics forgetting what it was they were supposed to be doing. In the same way, accusations might levelled at the publishing circus. There must be, there are, better books in Europe. In German too.

The disconnection is between the reviews and what is printed on the pages in this book.