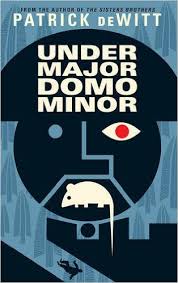 “Lucien Minor’s mother had not wept, had not come close to weeping in their parting.”

THE much anticipated (in these quarters) second book from Patrick deWitt, the follow up to Scissor Sisters. The two share striking graphic covers, and sharp titles, a play on character names.

I imagine deWitt having watched a box set of the Lord of the Rings all weekend resolving that the one thing it lacked was a sense of fun.

The writing is quick. “The valise stood alert on the floor beside him”. The women are “lard-armed”.

We are in some unidentified land.  There are trains and barons but no specifics just a castle and mountains, nor any sense of period, except an archaic tone in the narrative; “…there occurred an untoward happening.”

The effect blindfolds the reader, removes any sense of the everyday. We are forced to follow the thread of narrative without any familiar handles to grasp. Some imagery is almost Dali-esque: “The cut and style of each man’s outfit was dissimilar to his fellows’: one wore long trousers, another knickers with tall boots, one sported a shearling collar, while his neighbour trailed a scarf. Even their rifles were dissimilar, the lengths of the bayonets varying drastically.” The castle is Escher-like.

Chapters are short and concise, to be read in sandwich sized bites…each one leading up to a page turning sense of riddle, of mystery, of ooh! of aah!! of an edge of the seat expectation. The characters too linger in the mind.

There is a phrase half way through that catches the mood: “an exhilaration, for how curious life was, how unfathomably novel, and occasionally, wonderful.” Or again: “an invigorating concoction of jubilation and dire agitation”.

Humour is tricky in the naive, but all round this is a  wonderfully unpredictable journey into the bizarre, more fairy than fable perhaps, in which the chacters themselves have slightly altered perspectives, peculiar as it says, or in the the case of L pondering the question of the lie: “He wondered if it wasn’t man’s finest achievement, and after some consideration, decided that it was.”

At the back deWitt credits a list of other writers he has been reading including Dahl and Donleavy, but for me one missing might be Lewis Caroll.