Being mortal by Atul Gawande (Metropolitan) 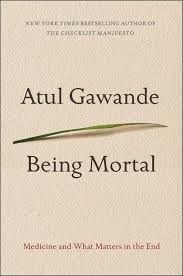 “I learned about a lot of things in medical school, but mortality wasn’t one of them.”

ON the surface this is the story of the death of Atul Gawande’s father, who, which makes it the more poignant, was also a doctor. And it is filled out with detailed accounts of other deaths he has witnessed primarily as a clinician. Or as he concludes “our most cruel failure in how we treat the sick and aged”.

Gawande takes us non medicos on a unique, chronological journey from the hated poor houses at the turn of the last century. He offers one image of the treatment of an elderly dementia patient who wandered at night. The prescription was a ball and chain.  The very term nursing home was an insurance tactic to move old people out of hospitals. “You would have thought we would have burned the nursing homes to the ground. We haven’t…”

Part of the failure in confronting how we deal with our last days, he argues, is one of imagination. Or not our imagination but that of his own profession. There comes a point at the end of life where the Hippocratic oath to keep a patient safe and healthy starts to become obsolete. All we might want is what he terms “sustenance of the soul” and probably no pain. He enlists one revolutionary example of an old folks’ home where first dogs, then cats and then birds were introduced as companions to give patients ownership. One of the most important things he suggests that any of us might want is our own front door and control of who comes through it.

All of this he backs up with froths of statistics. “Our medical system is excellent at trying to stave off death with $12,000 a month on chemotherapy, $4,00 a day intensive care, $7,000 an hour surgery….” all of which accounts for 25% of all American health expenditure being spent at the end of a lifetime, when at the end of the day, death is, after all, inevitable and much of these expensive treatments both intrusive and often unnecessary.

The argument is that doctors and nurses have not worked out dying as well as they, or, more crucially, as we might, like…best read this before you are too infirm to think for yourself.