The story of the lost child by Elena Ferrante (Europa) 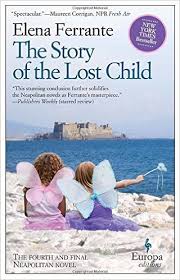 “From October 1976 until 1979, when I returned to Naples to live, I avoided resuming a steady relationship with Lila. But it wasn’t easy.”

OF COURSE,  it was not easy. Lila “remained the same restless creature with an irresistible force of attraction”. By the time that Lena reveals that the two of them are opposites: “I fair, she dark, I calm, she anxious, I likable, she malicious”, we know them well enough to suspect that our narrator is not as insightful or as objective as she thinks. She has become increasingly and in parts overwhelmingly emotional. She is in equal parts happy and unhappy as if on a playground seesaw that flips her up in the air as it hits the ground. Calm is not a word that springs to mind. Passionate, perhaps.

The bigger themes by now in this the fourth and last tome of the series come tumbling out of the cupboard, the role of women, of gender, of corruption, of motherhood and daughters. The student ideals of the ’60s and ’70s are bundled up in  the turbulent lives of their friends and the killer irony of Lela’s new career. Old tenements and modern mores rub shoulders. The children of the first books are maturing into elegant, dramatic portraits, Ferrante moves them around to get them to make her points for her and mark the passage of time.

If you have got this far, then you only need to be advised that she keeps her nerve as a writer and even drills down into the depths and allows herself a confessional aside: “it is more and more difficult to keep the thread of the story taut”….but her characters do that for her.

The axis though is always the girls relationship…“I’m a scribble on a scribble, completely unsuitable for one of your books; forget it Lenu, one doesn’t tell the story of an erasure”. In that Lila is wrong.

As with the first book, this is really two books wrapped as one, the first part entitled simply Maturity, a torrent of everyday events, the second more personal and reflective, a slow climb to an achingly intense crescendo, and yes a stiletto twist. The latter opens with this heroic passage:

“I left Naples definitively in 1995, when everyone said that the city was reviving. But I no longer believed in its resurrections. Over the years I had seen the advent of the new railway station, the dull tower of the skyscraper on Via Novara, the soaring structures of Scampia, the proliferation of tall, shining buildings above the gray stone of Arenaccia, of Via Taddeo da Sessa, of  Piazza Nazionale. Those buildings, conceived in France or Japan and rising between Ponticelli and Poggioreale, with the usual breakdowns and delays, had immediately, at high speed, lost all their lustre and become dens for the desperate. So what resurrection? It was only cosmetic, a powder of modernity applied randomly, and boastfully, to the corrupt face of the city.”

Words, words, words...
View all posts by drewsmith28 →
This entry was posted in 101greatreads, Biography, fiction and tagged elena ferrante, naples, neapolitan quartet, the story of the lost child. Bookmark the permalink.