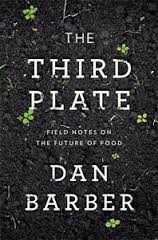 “A corn cob, dried and slightly shriveled, arrived in the mail not long after we opened Blue Hill at Stone Barns. Along with the cob was a check for $1,000”

THE best place to read this book would be on a summer’s evening in the middle of a field of corn. It is perhaps one of the more important books I have reviewed. These arguements need to get aired to a notoriously po-faced generation of landed farmers and agricultural college graduates who have destroyed the countryside, here and in the USA, potentially to the point that we might not soon be able to feed oursleves let alone the rest of the world.

Barber is a notable chef, his restaurant Blue Hills at Stone Barns in the Hudson Valley was this year voted 11th in the World’s Best Restaurants list.

The first plate was steak and carrots, the second plate is 28 day grass fed fillet served with heirloom carrots, which is roughly where you might say we are today, the personification if you like of farm to fork dining. His third plate – the future – was steamed herloom carrots sauced with a braise from offcuts of the beef. He goes much further here.

He takes us on a journey of discovery back down the food chain to explain why all that white flour that permeates the diet is nutritionally useless, the top soil in which it grows has been destroyed which caused among other things the dust bowls of the 1930s. His guide in this, as a chef, is of course taste. He is doing what any serious chef does, talk to his suppliers, but he has an anthropologist’s curiosity and an attachment to the land having been raised on a farm himself. Also, unlike most chefs, most of us indeed, he has also read up on the agricultural journals, so he recognises the value of a southern crop rotation from the 1800s – buckwheat, peas, corn, barley, rye, sweet potatos, sesame, collards and livestock raised in tandem, a latter day improvement of the native Indian three sisters of corn, squash and beans.

We currently think of foods as commodities –  indvidual items to be bought in a supermarket – the carrot, the piece of steak, but on the farm these two items would be unrelated activities. The need is to reconnect with the organic nature of the land, to reclaim it. And in that regard as a chef he (and others) has the vision to see how to link up different crop cycles, overlooked grasses, what in common parlance are called weeds but in fine restaurants might be marigolds, emmer wheat, wild garlic, wild radish etc His mission is to join up the thinking from the kitchen to the farmyard because, as he points out, most of what we grow these days goes to feed the animals not ourselves, which is pretty foolish and uneconomic.

In the introduction he explains:

“What we refer to as the beginning and end of the food chain – a field on a farm at one end, a plate of food at the other – isn’t really a chain at all. The food chain is actually more like a set of Olympic rings. They all hang together. Which is how I came to understand that the right kind of cooking and the right kind of farming are one and the same.”

For the most part he is pretty good at summarising the industrialisation of food although this rather juicy titbit might raise an eyebrow: “as late as the 1900s, a French girl from the countyside had her dowry measured by the amount of manure produced on her family’s farm”.

Along the way we meet a cast of the agroscenti like the sage of Californian organic growers Amigo Bob Cantisaro. “Mutton-chopped and moustached, he has thick silvery-black Rasta hair down his back, making him look more Pancho Villa-like than plain old Bob-like.” And Glenn, “an oddity, even in a place like Lowcountry, where eccentrics grow like beautiful weeds…”

He dates the start of battery chickens to one Cecile Steele in Delmerva, Delaware who, in 1923, accidentally added an extra nought to her order for 50 chicks. Still in the 1970s, 70% of chicken was sold as whole birds, now it is 20% “a nightmare version of the loaves and fishes – an agricultural system out of control”.

You might say this is all an elite arguement, but the land in any country is owned by the elite who are charged you might like to think with its good husbandry. You can read this as a list of acts of dereliction of duty that go back 175 years. Equally in the oceans he suggests that as recently as 1950 we took out 19 million tons of fish where in 2005 it was 85 million – “we  are taking fish faster than they can reproduce”

Dan is as sharp as any lawyer and accepts that most chefs have been complicit, although this book and various events around waste free, holistic cooking have started to get a groundswell behind them, not before time. Back in the day when I edited restaurant guides we termed this approach as Real Food, and that was 1982. Thirty years later I cannot easily point to anyone in the UK following this philosphy at all, least of all government or council. If you want to see such a vision in action, you might go here. But that is in Italy.

Dan takes us instead to the dhesas of southern Spain, home of the fabled Iberico ham, of Morucha cattle and a chance to meet the only free range foie gras farmer in the world, Eduardo. From there we move on to aquaculture and grains.

“Our job (as chefs) isn’t just to support the farmer, it is really to support the land that supports the farmer. That is a larger distinction than it sounds…” Quite. He decribes looking out on fields of American agriculture that suggested abundance, “but what I did not see were crops I could cook with.”

A long overdue politic for chefs. The food he is looking for is a “pleasure, but also a satisfaction”. The answer is to cook the whole farm.