Bad business by Robert B Parker (No Exit Press) 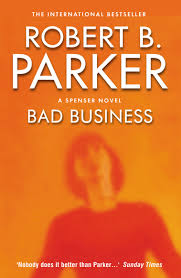 ‘Do you do divorce work’ the woman said.

THE late Robert Brown Parker wrote more than 40 Spenser detective novels plus another nine around the character Jessie Stone and six with Sunny Randall. Bad Business was his 31st, published in 2004. He was a master of dialogue, which accounts for 90% of this writing. Literally the story is told. Plot is all. Narrative is squeezed into tight paragraphs, often at less than one a page.

I suspect he has been allowed to drift out of fashion because of his tendency to take a sexually aggressive attitude to the women in his books. Verbal variations on the ‘50s airbrush glamour print.

“At the reception desk was a young woman with a big chest and a small sweater, who probably wasn’t devoted to golf or sailing”

This jingoist approach is at some odds with some of the recognition Parker has been given for bringing different races and sexualities into his stories from when he began in 1971. Maybe that was the stamp of the era.

Spenser’s first name is not revealed but he does have an encyclopedic knowledge of the greater Boston area. And how to read a liqor list. It is the details that etch a picture. …mornings kick start with coffee, then there might well be a beer for a stake out, on high occasions martini, of which he makes a personalized orange martini on days off. His women favour white wine – pinot grigio or reisling. He goes to a meeting. It is described as mine-was-a-scotch. Whisky is playing along. He does not like Campari…I am sure he does not trust men who drink Campari. He is particular, this is his university. His thesis might have been on minority beers.

The plot in this case swings through a series of increasingly unlikely well-i-nevers starting with a commission to trail an adulterous husband which has the first twist when Spenser finds that his client is also being followed and then well-i-never so is the mistress…after passing through a fair few revolving doors we end up Agatha Christie style in a room with potential suspects and reprobates whose secrets are swiftly eviscerated. The loose ends are not so much tied up, as put into a paper bag and chucked in the bin.

“The silence got long. No one said anything. No one went anywhere. Lance drooled a little and O’Mara rested his eyes some more. I knew what had happened now…”

Spenser is valiantly honourable. He does not seem even to be concerned about getting paid, not as much as he worries about getting justice. He is the small guy, the regular guy, someone to count on, someone just a bit smarter.

There are curious autobiographical overlaps with the role of the dog, and the nature of the relationship with Susan, as wiki explains here.