The trip to Echo Springs by Olivia Laing (Canongate) 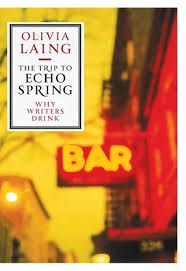 “Here’s a thing. Iowa City, 1973. Two men in a car, a Ford Falcon convertible that’s seen better days. It’s winter, the kind of cold that hurts bones and lungs, that reddens knuckles, makes noses run. If you could, by some devoted act of seeing, crane in through the window as they rattle by, you’d see the older man, the one in the passenger seat, has forgotten to put his socks on.”

AS you gather from such an opening paragraph Olivia Laing has picked up a few tricks from the writers she follows – Scott Fitzgerald (to whom she ascribes the perfectly weighted novel in the Great Gatsby – Ernest Hemingway, Tennessee Williams, John Cheever, John Berryman and Raymond Carver. The two men in the car are Cheever and Carver.

Notionally the title suggests this is a book about why writers drink and chronicles the slide of all six into alcoholism but you could also make a case for other factors like having a father who shot himself, like smoking too much, like the drugs, like parents who were alcoholics, like their latent or not so latent homosexuality, or womanising, the insomnia: A whole cross section of what you might term as mid 20th century social diseases, a veritable smorgasboard in fact of white male, middle class, mid-life neuroses which have been given the aggrandisment of print. Is there a connection?

And all these central figues, being writers, knew each other as compatriots and also rivals. They kept diaries and wrote letters and probably, no certainly never, thought that a diligent reader like Olivia would take the time to study all their output and and give it a social conscience. In a sense she is your world’s worst hangover, a historical one.

She is involved. She is from an alcoholic family although not so po-faced as to not allow herself a beer here and there. She is embarking on a travelogue to find the places they lived and wrote to fill in the landscape of where and when, an odyssey that might put more than a few aspirant authors off the task in hand. Or to put that glass down.

Or maybe it was just the era. People drank more in the middle of the last century. Or it was remarked on more. But as she points out alcoholism – a subject of which she is as well read on as any of the writers themselves – was not really recognized as a condition until the 1970s.

She writes elegantly herself, precisely detailed not unlike Fitzgerald in her prose, and it is her personal observations that colour the text. The people she meets on the way intersect with the main biographies. I am not a great fan of what is termed the I school of journalism (I as in me, me, me) but she is a fan, sympathetic, curious, intelligent and loves her subjects as if they were coveted ornaments on her mantelpiece which they probably are.

The title is from Cat on a Hot Tin Roof, where Brick goes to the cabinet to try and get his ‘click’ from the echo spring. It is a very brave, beautifully researched, elegantly orchestrated mirror that reflects a time and asks a more serious question about writing and fame.

This passage describes the river where Ray Carver liked to fish: “Morse Creek cut out through a stretch of blackish sand, over stones that ranged in size from pebbles to boulders. It ran very fast now, maybe four feet deep, humping and shouldering, the surface breaking apart in pleats. I knelt and dipped my hand, wincing. It had come straight off the mountain snowmelt, old ice, clear and as astringent as gin”.

Why did they drink to excess, she asks, but unfortunately her chronicles explain rather too well why. Hemingway for one was being tracked by the FBI because of his Cuban connections. He eventually agreed to secret electrical therapy to dry out. He never wrote another word after that and shot himself 18 months later (as did his brother and sister, as had his father) A bad trade, you might think.