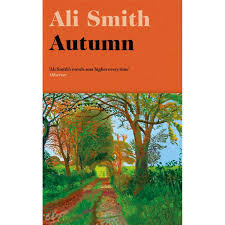 FROM the getgo this tale is populated with popular images like the variation on Charles Dickens opening to a Tale of Two Cities above, although here is the tale of two people. Themes of duality persist, of couples, of brixiteers and remainers, of life and death, of present and past, of real and remembered, of women and girls, mostly revolving around Elisabeth – with an s not a z – who has grown up to be an art history teacher.

Everyone flits past Elisabeth like so many falling autumn leaves of the title. They are not real but reflections. Her mum wakes up a bit when she appears on a TV antiques show. Daniel is lively enough, but he is dead. The reality is a sit down and watch TV familiarity. The scenes in the post office are all Monty Python, the hospital could be upstairs at Holby City, there is a middle passage that reads like Exupery’s Little Prince, her mum’s pal is from AbFab. These pastiches could hold their own against the originals albeit these are fictions which then mix up factions of real people – Christine Keeler and the forgotten pop artist Pauline Boty who provide another interesting, challenging duality.

In a novel, of which this only a part because it is often a poem, of which this only the first of presumably four parts, of which the point is not the truth, but the lie…it is going to be quite a feat to get all these guys back on to the same train for the sequel (which I have not read as yet). Or is memory playing tricks? Maybe the referendum was a TV show? It should have been. In that sense Smith is Sir Gawain on a quest and strays perilously close to fantasy. Her characters cannot be real. She is writing about a consciousness.

In essence Daniel, deceased, is trying to come back to life to tell Elisabeth…something…

He might want to warn her about the lavish, scary praise on the front cover. The great Behemoth of modern Publishing has called its minions to sound the clarion: We want a great new writer and Ali is going to be it. Ali will be our Donna Tart.  All this pisses me off. The BP lets her down.  The cover for example is a latter day Hockney, yes it says autumn but the book seems far more rooted in his earlier works by the swiming pool and the real, relevant, cover is anyway on the inside back by Pauline Boty. And then we have the most pompous of copyright credits in which Ovid gets a mention – well the Penguin translation of Ovid on page 87, should you care to look it up. Page 87 here is blank. No connection. Just a bit of literary snobbism. As if Ovid is going to sue. Or Penguin sue itself.

I like what she is trying to do. It is still so many carriages linked up into a train. I am a football fan at half time willing her to win. We are 1-O down. I have an idea this could emerge as… I hope so. Roll on Winter.