The Dry by Jane Harper (Abacus) 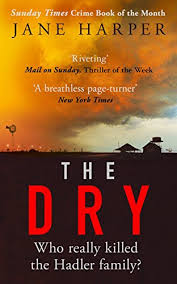 “Even those who didn’t darken the door of the church from one Christmas to the next could tell there would be more mourners than seats.”

AS in all worthwhile whodunnits, everyone in this small dirt town comes under suspicion. We all have secrets. For non Australians you may also need to know that that an avro is afternoon, an ute is a small truck.

The end is not so much a twist but a fork in the road, a choice of outcomes, the one more terrible than the other. Harper is not Tim Winton, but she does have a plot and a story.

You can speed read this kind of writing pretty easily: just scan from the opening paragraph down to the dialogue. These people do not wear clothes, don’t think a lot, don’t eat stuff or drink anything specific. It is a bit of a surprise when the brand name of the cartridges becomes a clue. A detail. These people are clothes pegs for a film presence on which you could hang a Gregory Peck flinch, a Rod Steiger wince, a Tom Cruise frown. Tensions in the small Victoria town of Kiewarra have been stretched taut by drought.

There has been a shooting at the farm. Aaron returns after 20 years for the funeral of his once best friend. There is a reason he has been away. The plot flows quickly. The writing is the kind that would be easy to follow for students of English as a foreign language.

“Karen was a really valued member of the team. But she had become quite stressed…She was snappy, which was unusual…” The Karen sat on the mat. So in shorthand:

The acknowledgements at the end to this best selling title reveal a small saga of their own. Originally it was part of an online creative writing course hosted by the literary agents Curtis Brown. Then it won Melbourne’s Wheeler Centre literary award for unpublished fiction (well it is about a town in Victoria). From there, as Harper confesses, a thousand doors opened. That was only in 2015. When writing is successful it can happen very quickly, which is reassuring.