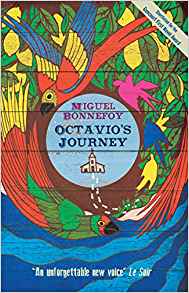 “At the port of La Guaira on 20 August 1908, a ship from Trinidad dropped anchor off the Venezuelan coast, unaware that it was offloading a plague which would trouble the country for half a century.”

I abandoned two Booker prize winning novels in the last week which I had fully expected to make this listing – both after more than 100 pages albeit I am a bit clueless as to what was being said in either at all, just so much middle aged white man verbosity. By comparison I devoured this beautiful little book set in Venezuela, translated from the French in house at Gallic Press by Emily Boyce. In less than 96 pages, each chapter marks a step, each character is defined, each situation becomes apparent, each action hides a certain drama. The story is spun. There is an explosive, thunderclap of a plot change on page 47 that made me put the book down completely and draw breath. To even let a few details of the plot leach out would be to spoil the enjoyment. Not unlike Laura Esquivel’s 1993 Like Water for Hot Chocolate, it is a joyous, fresh thrill of a read from south America, a totemic modest little work of genius that warms the soul and has reset my reading compass. We open with a plague and a church and a cure. A man with a gun shoots a warning shot that downs a whole harvest of lemons, which counts as a miracle. But it progresses into a book about words, literature and reading and their value through a man who barely speaks and a woman who cannot stop herself from talking named after the country herself. Even the thief Guerra declares: “The way I go about burgling a house is like a writer sitting down to compose a poem”. Later the man imagines Literature herself as having “loose hair, torn clothing and a heroic air, wear a machete in her belt or a shotgun over her shoulder”.

What this little tome has that neither Booker winner had was the novelist’s great opportunity – story, and believable, interesting people, in a setting that breathes, almost like a fable. And it has something to say for itself. Here is a paragraph:

“Anna Maria Reyes Sanchez had seventeen children, the youngest of whom, Eva Rose, had shone from her earliest years. Eva Rosa helped to farm the fish, wove bags from goat hair, trimmed the cows’ hooves with maternal care and was up sowing the corn before sunrise. She had a face like a china doll, pale little metallic-grey eyes, and delicate skin as yet untouched by age. She always wore a tortoiseshell comb in her hair and wrapped her centimos in a hankie laden in her bra, so as to keep her fortune close to her heart.” A perfect portrait in 96 carefully chosen words. I thought I had guessed the ending with four pages to go but was very wide of the mark.

Bonnefoy himself is still in his thirties. He was born in France and raised in Venezuela and Portugal and has been recognised in France making the short list for the prix Goncourt in 2015 as well being named as young writer of the year in 2013. He has another book Black Sugar out too with the same team which I will review next…