A long and messy business by Rowley Leigh (Unbound) 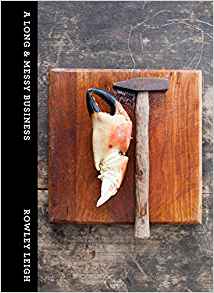 “I have been doing this sort of thing for quite a while now.”

I am not sure anyone should write a cookery book until they reach a certain age. It is quite possible to open a food business with a dozen or so recipes, but that does not constitute a book of knowledge. It is down vocabulary and experience. And as a lot, probably most, are ghost written these days, there is no voice.

Rowley Leigh has plenty of voice to go along with his experience. He recalls unloading the first lorry load of produce delivered from the Paris markets at Rungis back in 1979. He has been at the helm of two of west London’s most fashionable restaurants Kensington Place and then Le Café Anglais, so he has built a fine repertoire of trusted post Elizabeth David style classics which he shared in the Financial Times for many years which form the back bone of this collection of monthly highlights.

There is a modesty and honesty to his writing and to his recipes. “Good cooks love a snowy head of cauliflower for the thing of beauty it is…”

And he slips in some technical and historical notes that might appear on a TV quiz like QI. “Classically crème Dubarry would be thickened with a béchamel sauce and a potage Dubarry with potatoes. I prefer to use rice…” Plus there is a little backgrounder on the salacious Comtesse Dubarry herself.

You feel the effort that has gone into the cooking and his frustration when the Times columnist Bernard Levin “spurned the scallops and foie gras, ignored the turbot and the pheasant and contemptuously murmured that he would just have an omelette.”

But then Leigh trained with the Roux brothers who used to audition young chefs by asking them to prepare an omelette, so his technique is worth listening to…”Heat the pan with the merest film of cooking oil with the suspicion of a heat haze. Add the butter and quickly…”

His Bolognese – a ragu in fact – is worth the price of the book as are many other recipes which offer a year’s worth of pleasure as much in the reading and cooking as the eating. There are little instructive tricks like marinating all the ingredients for a fish soup overnight in white wine before the cooking and then thinning the mayonnaise for the rouille with a little of the soup itself.

You might presume that such a work would have been snapped up by a mainstream UK publisher with a healthy advance – after all, to anyone in the know – many of whom are listed in the back as supporters – this is probably going to sit alongside Simon Hopkinson and Lindsey Bareham’s Roast Chicken and Other Stories, which was nominated as the Waitrose food book of the decade. No such antecedents, as it comes from the crowd sourcing Internet start-up Unbound.

The evocative still life photograpy by Andy Sewell is equally awe-struck by the thing of beauty that it is.