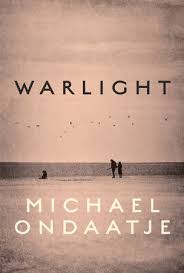 “In 1945 our parents went away and left us in the care of two men who may have been criminals.”

I RECOMMEND that you do not read too many reviews of this brilliant contender for the Man Booker 2018 prize. Or even listen in to the chat that will surround its nomination. The story telling is so careful and intense that even straying a few pages into the novel to offer a synopsis or too much flavour might spoil the enjoyment. The context is brilliantly researched. Post world war 2, London is all moody and foggy and filled with dodgy characters on the make. The dog track and the river are early themes. Like Ondaatje’s Booker of Booker winning title the English Patient he pulls back the sheets on an obscure, unobserved corner of the the theatre of war which he colours in precisely before pulling out slowly for the big picture.

London is emerging from the wounds of the blitz. At the centre we have the teenage Nathaniel and his sister Rachel roaming pretty much as feral kids in the rubble and underworld. He gives us an early clue – everyone has nicknames, so may not be quite who they seem. Nathaniel likes maps, to draw things as they are, to sketch in the world that lives in the boundaries. He is a selfish, driven adolescent which sort of serves to blinker the narrative rather cleverly.

“I felt I was a caterpillar changing colour, precariously balanced, moving from one species of leaf to another.”

And he is joined in this murky, half world by the man the children refer to as the Moth and the former boxer, The Darter, Pimlico’s formerly finest and his girlfriends and the lovely waitress Agnes whose name is not really Agnes at all.

The opening 100 pages or so drift masterfully creating a rich overture that might swerve in any direction…anyone looking to write could/should  jump into a few chapters. Here is a short sample of the children’s new housemate:

“For a private man who loved classical music…he had the loudest of sneezes. Bursts of air were expelled not just from his face but seemed to originate from the depths of that large and friendly stomach…late at night they could be heard, fully articulate, travelling down from the attic rooms as if he were some trained actor whose stage whispers could reach the furthest row.”