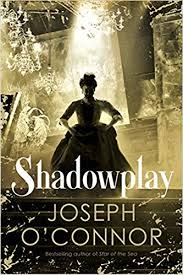 JOSEPH, how nice to see you again. Another tome, lovely. A pleasure, I am sure. A treat even.

Back in the Ghost Light territory are we? I never connected that Bram Stoker knew Ellen Terry or that they both knew the great actor and impressario Henry Irving but I do know the Lyceum in London and the Strand and all that, a little Edwardian pastiche is it to be. Turn of the century? Fine. Those opening Victorian chapter summaries

that sort of thing. I see you have not lost your gift for words

Bram bequeathes from a hospital bed his notes and scribbles to Ellen, a clutch of diary pages, some in Pitman shorthand

and then further back to the young, would-be critic trying to have his theatre reviews published by a reluctant Dublin Mail. The editor – a small man,

His purview is for more heartwarming stories of cats and dogs or warnings about the perils of gin.

Parts unfold with Bram as Bramy even Bramzie as Stoker as Auntie as Mother and in the first person as he struggles by day with the theatre lights, with Irving’s impossibleness, with Terry’s beauty and by the early hours of the morning with his own writing. The Shadowplay of the title is the writing of Dracula but also hovers over the cast of each Shakespearian performance, an inference of a gay underworld,  and ultimately of the roles of writers and players and even audience. This would be a good present for a theatre-lover.

Some of the buildings seem, as in Dickens, to have as much character as the people. The Lyceum theatre, Irving’s great ambition to make theatre respectable, looms over all. The era and the city itself also wear hats. And all this is laced with sexual innuendo and Jack the Ripper fogs.

You might just read chunks as poetry irrespective of the narrative, the vocabulary is stunning. Here is a small passage from towards the end which in 66 words seems to cover more territory than someone else’s whole chapters:

For once the back cover credits are not overstated – ‘sensual density’, ‘stupendous’, ‘smell the greasepaint’, ‘a work of art’ – respectively from Peter Carey, Sebastian Barry, Deborah Moggach and Essie Fox. Respect.

There is a small mention of O’Connor’s Star of the Sea here as it was a while between reading and writing this blog, but a longer appraisal of the Thrill of it All here.