A Tale for the Time Being by Ruth Ozeki (Canongate) 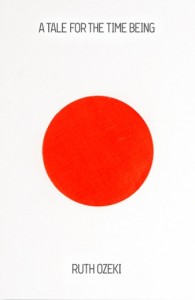 My name is Nao and i am a time being. Do you know what a time being is? Well, if you give me a moment, I will tell you.”

THIS is a great book. Quite why it did not win the Booker prize 2013 I do not know unless it be that many people do not want to read a book where the central character is a suicidal teenager. I heard one reviewer on TV criticise it because one of the narrator’s husband’s was boring which rather misses the point that he grounds the whole book, the whole fantasy, the whole spanning of the 20th century. He needs to be boring for the story telling to work and is brilliantly so, but his is a small bit part, solid as a concrete groyne.

For the rest it is a book of imagination, seriousness, a re-configuring of things we only half knew about written with elan and brevity and concision. Early hardback editions came out in book formats to echo the storyline which will surely become collector’s items. This is the more familiar version. 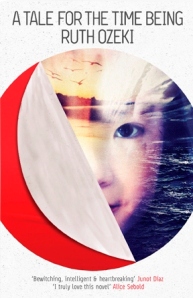 There is a subtle distinction between review and preview, critique and discussion which I do not want to cross and spoil the fun. From the opening page the pattern is challenging, flirty. “Are you reading eagerly waiting for your beautiful lover?”. And as each layer is unpicked…”Ugh! That was dumb!”

One part of the brilliance here is the shuffling of the narrative cards. Above all, as the title suggests, it is a tale very much of NOW, of post Fukushima, post tsunami 2011. It is topical in a surprising way. Obviously it has been written very quickly but it has also been published incredibly swiftly, not just the printing but into paperback with endorsements already from 20+ reviewers including one from the Times which the author may come to regret “unexpectedly moving”. Ahhh, hum, yes, you didn’t see that one coming, did you old boy.

The twee teenage edge – in a sense this is the manga version of Catcher in the Rye – is just one shelf in a whole bookcase of ideas that span the 20th century and its greatest themes, rather uncomfortably perhaps coming back now even, as if it was science fiction, with drones and computer games. Ozeki set herself a monumental task and does not waver in delivering on her promise.

PS: A friend told me she found parts upsetting, particularly the cruelty of the Japanese to themselves which I pass on without comment although anyone brought up on War Picture Library will not flinch 🙂