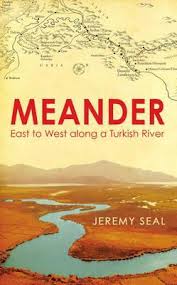 “I would have gone down the Meander years ago if I’d known it existed.”

Apart from the maps, which are almost as deliberately confusing as perhaps the suspicious Turkish military might have intended for foreigners, this is a brilliantly informative re-telling of a history that has been hidden beneath centuries of western prejudice and self interest.

The Meander is a river in Turkey which winds around and around and from which we take the word itself. Jeremy Seal sets out to navigate it in a small canoe but this is no travel book really rather a journey back beyond Biblical times that restates the importance of this part of the world as being at the heart of Mediterranean ambitions and politics, the axis of east and west, infidel and christianity, old and new right up, even to an extent to today…

His descriptions are precise and evocative. “It had not crossed my mind that laying my hands on a trowel might present a problem in a place like Dinar. How but with trowels had the chillies, peppers and aubergines that run amok in the scruffy little town’s kitchen gardens been planted? What of the geraniums that bloomed in rusty cooking oil tines at the foot of whitewashed walls?”

And they lay questions into the present and past importance of Turkey as a nation and how it was shaped in the modern context. The living history comes from the people he encounters as he tries to chart a course down the river, which is mostly but not always still flowing. Across this he interlays the older magnificence of empire and lays down a different context to that taught at least in my school which was just a one sided jingoistic narrow crusader view. This is the heathen version. the question is who were the heathen?