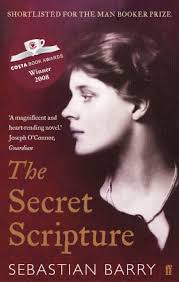 “The world begins anew with every birth, my father used to say. He forgot to say, with every death it ends. Or did not think he needed to. Because for a goodly part of his life he worked in a graveyard.”

This is not a story – as we might be sucked into thinking – about the madwoman and her keeper but in part already a parable of the violence of young men that seems even more relevant now with Syria, Taliban, Africa et al as in all the troubles of Ireland itself.

Irish writers seem to inherit a literary gene passed  down through generations of story tellers that allows them to play with fiction. Barry you sense immediately is up there with the elite and this title walked off with the Costa book of the year 2008. He tells a story like he is shuffling a pack of cards…like you might be in a small snug on the west coast surrounded by neighbours, the fug of a fire and a pint of black…

The use of words is electric: “His long whitening beard was sharp as an iron axe. It was very hedgelike, saintlike.” And from description to snagging, nagging notions on the human spirit: “Of course I was young, very young but, as I remember it, no one is ever quite so old as a fifteen year old girl.”

Barry is cunning , holding back information or at least reflecting a single perspective. We are very strictly in the Present Tense here. We have no more foresight than the characters themselves. We are blinkered by the reality of now, not distracted by the import of history and other events.

The effect is reinforced by a double narration, both trying with their very different ambitions to tell the same story, the story of the “savage fairy tale” that was Ireland in the 1930s, bound by a mutual shyness and empathy. As the tellings intertwine they become as taut in their own ways because they also share different impediments to plain speaking. Both have history.

We span a life, we span a century but we are also ushered around each narrative tributary in the sure knowledge that joy and tragedy are coming to the beachside dancehall just as surely as the back hill folks come down for a waltz. His actors are modern in that their emotions seem timeless, events just arbitrary or in fact an excuse for a lavish visual conceit. The imagery is landscape large, a point reinforced when Roseanne talks of French painters and does not want to give their names in case she misspells their names.

“Happy. Just straightforward ordinary girls we were. We liked to bring as much despair as we could to the lads. Who watched on the sidelines of our happiness like sharks, devouring our attributes with their eyes.”

I am deliberately not giving much away here. What makes this storytelling so clever is how each vignette manages to suprise and delight on its own, told in rich, rich prose of the kind the Irish seem to have a monopoly but this is again doubled up as an Irish story, as told by an Irish writer , about Ireland.

His heroine may have gone to watch newsreels but she is still the waitress at the Caffe Cairo, 1929. The dark forces are still those of Irish foloklore. She describes De Valera by the slick of his hair. There is mention of the 77 and one is half expected to know all this backdrop history. The unsureness also lends edge. Do you need to know, should you know, does it make any diference? What after all is truth or sanity, the more so when it is stretched across from the start of modern – or at least post bedlam – psychiatry to present day.

In great writing often the substance is the human condition itself and  to explain that away in narrow confines with labels like patriotism, catholicism, love etc is to diminish it.