Edmund de Waal pronounces in his prologue that this story could almost tell it itself. Yes and no, Edmund.

To anyone whose family were part of the same exodus from Odessa to Vienna to Paris as Russia, as then was, impaled itself on revolutions there is vicarious interest in the minor details he unearths about the fabulously wealthy Ephrussi brothers.

This wealth emanates from cornering the grain markets in the port city and routing the profits into huge infrastructure projects to build rail, roads, public buildings. Banking in short, although how far these foppish boys were actually involved in the moneymaking is unclear or skipped over here. There is more about spending it than making it.

One of the brothers, Charles, who de Waal admits to having some difficulty with at the start, channels this wealth into his passion for art then collecting which leads him to all things Japanese with all manner of new artifacts arriving for the first time in Paris circa 1870. New houses were being decorated in layers of things Japanese – porcelain, jade, silks, bowls. It was the era of le Japonisme.

Charles has a mistress, Louise, an unlikely figure cast as a respectable mother of five, whom he meets illicitly at galleries where the couple collude in buying art to collect. A sort of vicarious sexuality. And then Charles discovers and buys this obscure sub genre, the netsuke, miniature individually carved figurine caricatures that could be passed around society salons as conversation pieces “witty, ribald, sly” and very tactile, sometimes overtly pornographic,  most of which pre-date Perry’s discovery of Japan itself. 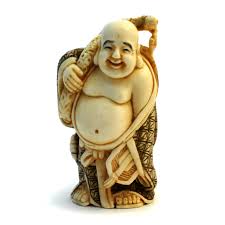 The hare of the title is one such more polite item. Rats were another popular theme, their long tails lending themselves to wrapping around the body. And rat catchers 🙂 I told you that in 111 words. De Waal takes 66 pages.

But it is this collection that De Waal himself inherits and sets himself a potentially fascinating but mostly unrequited task of discovering their histories. This is like the primary school essay Day In the life of a Sixpence piece (or today a dollar or a euro or a bus pass).

Unfortunately, if a family can be said to be egoistic, the focus is on their own Ephrussi story rather than the far more intriguing netsuke possibilities of who these comic, sexualized bits of art might have been commissioned by hundreds of years previously? Or why? Were these just an early manifestation of pornography or did they have a symbolism or significance or even a use?

There is a third sub strata here which also might have produced fine fodder for a more accomplished author which is the Ephruzzi’s desire, lust even, as perhaps of a great many immigrants, to be accepted in a foreign country, to be part of the establishment and in gauche and rather surreal ways what that actually means to the ambitions of different members of the family with the financial means, unlike most other immigrants,  to achieve almost anything they might want.

Ultimately de Waal’s art is as a potter who has taken four months off, which turn into two years, to become the family biographer. In that he is probably too close to write what might have been written…

Although he professes himself not to be interested in money (they are all a bit lucky like that in this book) there is nevertheless a fairly obvious desire to aggrandise his otherwise obscure inheritance. Ultimately none of the three or four themes really wrap up satisfactorily in any literary sense and each tends to get in the way of the other, so no one wins out…apart from the netsuke of course who get some cheap, bit grubby PR at the expense of what should have been the bigger issues.