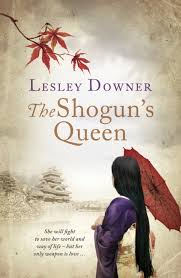 “Japan has been at peace for close on 250 years, ever since Ieyasu Tokugawa unified it in 1603 and took the title of Shogun – Barbarian-quelling Generalissimo.”

WHAT Hilary Mantel is to the Tudors or Rosemary Beard to the Romans, Lesley Downer is to ancient Japan. History in a kimono. Within the opening pages our 14 year old heroine Okatsu comes within a silk thread of being violated. We are not breathless, but panting, saved by a woman with blackened teeth. We are in a world of palanquins, lanterns, candle wax, tatami, honour and letters. The old order is about to be breached by the arrival of barbarian Americans and Russians. Historically we are at the start of a contact that will start with cholera and eventually end with an atomic bomb. But our heroine is embarked on a different journey through the layers of a secret, all powerful dynasty headed by the omnipotent and rather wonderful Lady Honju-in, mother to the shogun.

In a sense you could see this alien world as akin to Lord of the Rings, just it is Frodo-san. The structure is like a western, we travel in convoy. “Her retinue swelled the already vast procession to bursting point, as if a snake had swallowed a pig.” News travels slowly as they carry on to the capital Edo while the foreigners’ pitch-black funnels and sails gather in the harbour. Okatsu’s name is changed with each elevation of status. Her career is masterminded by a Gandalf style mentor in the swashbuckling Lord Nariakira.  Where it differs is that the story pivots on the role and hidden boudoirs of the women who “paint, write poetry… practise tea ceremony and …wield considerable power.” The men are just plot puppets compared to the likes of the vigilant chaperone Ikushima with her icey smile. If she does not quite pull the strings, she can at least give them a pretty good yank.

Travelogue, tick. Insight into the hidden world of the shogun’s palaces, tick. The good kimono guide, tick, tick. House of Cards style intrigue, tick. This is in fact the prequel to Lesley’s other three books, so a good place to start.

The politics are topically fraught in a Brexit sense as we edge to an impossible impasse. Another idea that rarely gets aired is that an isolated Japan had managed to live at peace for 250 years and evolve its own radiant culture and customs. The arrival of the smelly, hairy giants was the start of globalisation.

The finale would make for great cinema, if you could round up a Mark Rylance  to play the shogun and Glenda Jackson as Lady Honju-in…

Words, words, words...
View all posts by drewsmith28 →
This entry was posted in Biography. Bookmark the permalink.