Recipes for a nervous breakdown by Sophie White (Gill) 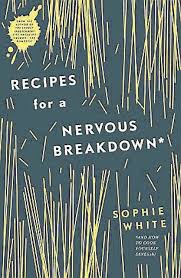 “Before going mad, I didn’t really give madness that much thought. It seemed like a distant concept that had absolutely zero bearing on my life.”

THE best recipe writing comes from a compulsion, like composers, to explain a passion, a conviction as to her rightness. Sophie wonders early on if “I am literally the the only person in the world who drifts off to sleep musing on the following day’s menu plans”. These plans take us on to the comfort of the peanut butter series, on to the chilli con carne which includes ale and chocolate and on to homemade Rolos. For salmon with caper butter she explains: “in a fit of restraint in this instance I opted for a shitload of butter, and it tastes delish”.

This is the antidote to celebratory chefs, to clean eating. She may well end up being a TV chef but it won’t be TV cooking as you know it. This is Dawn French meets Gabrielle Hamilton. Bridget Jones goes to cookery school with Mr Bean. She opens with her bad experience on ecstasy – how one pill took five years out of her life –  and then takes us on a 20-something’s romp through boyfriend (Himself), baby (Yer Man) dealing with parents (Herself and Kev) and only child syndrome etc each episode rounded out with some inventive, sometimes hilarious but thorough recipes including the “only ice cream recipe you’ll ever need…no ice cream maker required”.

She writes beautifully in that loose ramble you can also find in other Irish writers. Her friend Mark is – one of those six foot 14 year olds who literally has no clue what to be doing with his giant man body. The Amsterdam bad trip might count as one of the finest pieces of drug writing I have read.

And she picks up the mores of her era, especially to do with eating. “I have been pretty fat at times” but if only “one could be as fat as the first time one thought one was too fat”.

She is also a bit of a social media babe. See her here making whipped cream the FUN way. In a sense this memoir is before the event. Perhaps that is the joy, making the everyday important. Everything about the book itself, the typography, the subdued photos, the paper has been given the kind of respect and care a diva would expect.

At heart it is about our conflicted contradictions with eating. She comes out in favour of meringue roulade… with a little low carbs on the side.