Ashes in the Wind by Christopher Bland (Head Zeus) 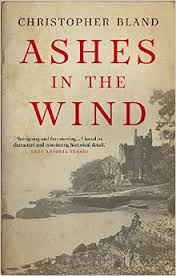 “John Burke wants to be Tomas Sullivan. John wants Tomas’s worn brown boots, the scabs on his knees, his green jersey darned with whatever coloured wool had come to his mother’s hand. He wants to talk like Tomas.”

AN old school book, economical and direct, parallel tales of two Irish boys in the first half of the 20th century. Tomas is a bottle of whisky. John is red burgundy. The style is perhaps informed by Christopher Bland’s time as a businessman and media chairman, notably at the BBC, the Royal Shakespeare Company and BT (and some publishing too at Century Hutchison). I heard him quoted as saying that had he known the pleasure he found in writing/story telling, he would have started much earlier. This was his first novel, published in 2014. He died in January this year. His subject matter is worth our attention as he tracks the painful schisms of Irish independence. It was, you could argue, the Irish through the various factions of the IRA, who invented modern terrorism, or maybe it was the moment that patience ran out for empire. Predictably our heroes are cast on either side of the divide, their romantic escapades as disruptive as the political shenanigans.

The colourful horse racing scenes dovetail in a curious way with Doped which picks things up later in the ’50s but reveal another side of the author who also owned a vineyard in Gascony and was chair to Leith’s cookery school. A good venue to read this book might be a stable loft with clean hay and regular deliveries of mugs of sweet tea.

The narrative veers towards the military. She anounces she is pregnant. He shows his elation by going off to paint the spare room. The women are all a bit of an unkowing quest for the boys to discover their mother Ireland. The personal like the politics is sloganned. By the third part, the narrative accelerates as Bland finds himself as a writer. His real theme is in the title. For all the noble virtues we imbue in words like patriot, freedom, independence, there is another side of the coin for those who do not share in the triumph.

On a personal note having witten a history of oysters, I found the end scenes all the more heartwarming.