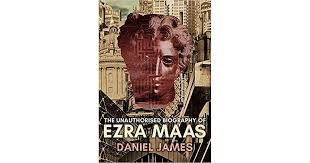 “This book is dangerous”

Brash, original, smart… star reporter Daniel James chases down the elusive recluse that is Ezra Maas, cult artist, vanished megastar…this is the kind of book destined, I hope, to find a cult following of its own, shades of Le Carre, shades of Chandler set within a backdrop of cultural and artistic road maps from Samuel Becket to David Bowie to Banksy and creeping into the 21st century of redactive texts, threats, psycho thrills.

The nearest thing I can relate it to is the film Network starring Peter Finch and Faye Dunawaye. But there are also overlaps with the brilliant The Seventh Function of Language by Lauren Binet. The philosopher Roland Barthes brought to life amidst possibly a hoax?

This won the people’s vote in The Not The Booker Prize in the Guardian, only to be overruled by the judges who went for Supper Club by Lara Williams (which I have reviewed below for comparison, which there is not really).

Here we are swirling through an art and literary vortex.

– I just want the truth.

-There is no truth, only art.

Nothing is what it seems, even James himself is only a part the author, his work picked up by an anonymous curator who adds footnotes, enticements to other references. Followers of Thomas  Pynchon are especially well rewarded.

Towards the end this curator gives us a slant of his own:

– The story took place before the phrases post truth and fake news were coined, before a new wave of narcissistic, capitalist tyrants rose to power in supposedly democratic countries on a wave of racism and greed…

Spookily that is the territory.

We are tapping in on the up to date, Mr Lyan really does have a bar under Sea Container’s house on the Thames. A passage includes the signing of the book deal with this same Liverpudlian publisher Dead Ink, and yes one Nathan Connolly is a director.

Some of the quotes and asides seem to be from real people. Brian Ward, professor of American studies, is quoted and features in the list of people who supported the book, others like Sara Cain are perhaps a veiled reference to the movie Saving Sarah Cain. A footnote links a Newcastle drinking den to Joe Summerfield who indeed was at the Poisoned Cabinet in that city. As with the Maas mystery James is interlacing fact and fiction, the supportable with the unsupportable. Jakob Tischbein was a painter in Lubeck who allegedly was one of Mass’s teachers in 1968. He is quoted as saying:

– My first Ezra Mass artwork was like finding a new letter in the alphabet, or discovering a new colour

Great, only the real Tischbbein died in 1791…

Through all this biographer and artist drift, and joust, the one perhaps dead, perhaps who has left a trail. All smoke and mirrors. There is some clever brainy stuff in here. There won’t be many people opting to choose it as a special subject on Mastermind.

It is a very exciting read, unexpected because the context is so unexpected, the ideas so intriguing. And the writing is astute, rich with its own inferences. It is a bit mad but a bit genius too. 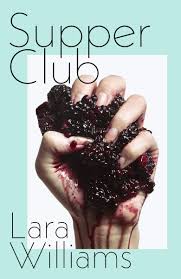 Lena was the first.

CONSIDER this as a recipe book to which the author’s social worker has attached notes about her sexual history.

The Club is an all female secret meet-up to misbehave, throw away inhibitions, emancipate, eat, drink, take drugs, and inevitably, eventually vomit. Cooking is Roberta’s salvation or means of empowerment.

Sadly the meals at the club itself are mainly foraged from supermarket dumpsters and don’t have the elegance of Roberta’s experiences with soufflés, Thai red curries or spatchcocking a chicken. Her instructions for making kimchee are superlative.

The irony of this book winning the Not The Booker prize is it might not be out of place if it masqueraded as an extra chapter in the co-Booker winner Girl, Woman, Other by Bernadine Evaristo. Similar casts. Similar problems. Similar twenty-something. Similar sexual mores. Similar sistas. Only Roberta likes to end most sections with a good cry. When in doubt: blub.

Sex is visited on Roberta and her friends like flying saucers dropping out of the sky. The boys do not get much description except in so far as they are judgmentally appraised without sentiment, emotion, or empathy for their performance, or lack of it. This kind of sex is all meat and potatoes. There is talk of love but not much is on show. These girls are essentially, primarily, stoically about themselves. Roberta is also very needy with her desire to be wanted becoming almost maniacal. She assembles her various neuroses like ingredients for a recipe which she then bakes into a usually unsuccessful relationship.

To see how it can be done give Sophie White a try.